A downloadable visual novel for Windows, macOS, and Linux

Please note: This is the OLD DEMO from 2018! The full version of Love Hues! is available for purchase here.

Love Hues! is a college visual novel packed with both character and world secrets. You'll be playing as Skyler (changeable name) and navigate your first few months at Falls West University, where you'll meet 5 romanceable characters who hide certain truths about themselves and the campus.

A game by Oneirocritica Games, with a soundtrack primarily made by 'Moode Myoozik, who can be found here and here!

Pick your appearance and pronouns!

Pick whichever main character appearance you like + your pronouns - you can romance or befriend anyone in the cast regardless of your choice!

Certain choices in routes will add new scenes to other routes you've already experienced or will unlock secret content. Learn as much as you can about Falls' true origins by exploring the game from every angle, and see if you can understand what everyone means when they whisper the Curiosity's name...

The full version of Love Hues! has:

And, of course, plenty of CGs! There are 32 CGs in the gallery and at least 2 extra in the game.The demo version of Love Hues! has:

Romance? Befriend? The choice is yours!

Every character's true ending  can be unlocked whether you choose to interact with them romantically or platonically! On that note; meet the romanceable cast + their alternate outfits! (They each have a minimum of 3 outfits though some have more!)

James: Flirty third year pre-med student. He can befriend anyone and everyone and will never pass up on a coffee break with a friend. He/him.

Nova: Bright first year Arts student. Nova is well known as one of Falls' best amateur historians; her family goes back a way swith the university and she's doing plenty of research on its strange past. She/her. Makes a cameo in the demo, but her route is not available.

Ava:  A quiet idealist who is frequently absent from both campus and her classes. She seems to know much more than the others... She/her. Makes a cameo in the demo, but her route is not available.

The game should install and run without an issue once you've unzipped it! Make sure you select the file that's .exe/the application to play the game.

Certain anti-virus softwares will ask you if you want to run it/will try to remove the .exe due to the unknown publisher signature; just permit it to run and it'll work. You can also scan it beforehand if you like!

Oh. My. Goodness. The writing in this is phenomenal, it's so easy to fall in love with the characters, the are style is gorgeous, the dialogue is believable and not awkward. It's an amazing experience. I'm pretty picky with dating simulators because there's a lot of dialogue and when the dialogue isn't believable it's super hard to be immersed in the experience. Everything about this is amazing and I'm honestly disappointed it's not finished yet! Definitely keep working on this!! I can not wait for the full release! Thank you so much for this wonderful experience.

Thank you so so much!!! <3 I genuinely appreciate your kind comment!! Development has been challenging lately: at this point I'm polishing the game, and it's been taking more time than I'd expected, so I've been feeling a bit demoralized . But! The complete game is going to be huge, it has lots of secrets and branches, and I'm going to do my best to pull it all together into a stellar final product. Thanks again for taking the time to leave the comment and rating, it means lots to me! Feel free to follow the Love Hues Twitter for regular updates. :D

First, about the GUI and overall look-the gray textured patterns and rainbow colored highlights took me right back to the old Windows 95 that had textures and rainbows that looked just like that! I don't know whether that GUI will be kept or not, but it was rather neat.

The sprite art was quite pastelly. I like pastel things, so it goes hand in hand with the rainbow tones. The CGs were well done too, and a pleasure to look at! The one of us shaking hands jerked a laugh from me. The one of the blue sky with the moon (or a very pale sun?) is very pleasant to look at indeed. I can pick out the brushstrokes. I think. :D

I would say James is still my favorite, haha.  And Ava! For Devlin, I never got the "stern" or "elegant" or "businessman" vibe from him, just "quiet" and "mysterious". I think the white hair throws me off. And his eyes just give off the impression of quietness. It's not a bad thing by any means, though! I actually got his friend route the first time around I played the game, heh. I was just kinda worried about him.

Last, I really loved the middle ground options. In the beginning, when deciding whether to side with Toby or James, you could decide to just go back to the student fair. I thought that was nice. It's something I would probably do when I was in that position, and I know some games wouldn't have that option.

Anyway, I look forward to the full game!

Hi again! :D I'm very happy to see you on the front page! Let me start by saying that I really appreciate the time and thought you put into this review; I was smiling all the way down and I'm glad you enjoyed the game.

I must say that was a cool correlation with the GUI!! I didn't even realize it had a bit of a thematic resemblance to Windows 95 until I looked up that interface, lol; it's definitely unintentional but I'm glad you liked it! (Ideally I'd like to get a super fancy GUI in the future but I'll likely keep the current one for this LH, so rest assured, it'll be there in the final version!) I'm also happy that you like the rest of the art; the handshake scene was super fun to draw.

Cool! I still can't officially pick favorites (:P) but it's great to hear that you connected with a couple of the characters, especially Ava! I can definitely see that how Devlin doesn't seem stern, by the way - I think I ended up writing him as a more reserved character rather than strict. I was conflicted about locking Ava and Nova out of the demo; I really wanted to give players a chance to interact with them, but canonically it wouldn't quite work, haha... I sneaked them in where I could.  (P.S. Both Devlin and James are getting more updates in the polished/full version of the game that'll touch more on James' experiences in pre-med and Devlin's day-to-day challenges in the union!)

I'll continue to try and make the choices as realistic as I can! I was a little worried about them as I realized some might be too straight forward haha... I wanted them to be fair + something the player might do!

Thank you again for playing the game and I hope to push it out as soon as possible!!

Of course! I try to comment on games that I like, and I put extra effort in if the dev is like you :p I'm glad you liked it.

Mmmhmm. There was some strong nostalgia going on with this game, from the moment i opened it up. I don't know nostalgia what for, but it was nice.

I got a sinister-ish (in a good way) vibe from Ava. She knows our name and knows a lot about the mystery? Hell yes! Twin Peaks here we come! (I thought of TP for some reason, maybe because Ava reminds me of Kyle MacLahan-someone whom "you trust enough to go into a strange world with." I guess!)

If you included some of James' daily routine as a pre-med I would be enthralled. Would make me like him even more in fact. (He seems like the kind of person who would enjoy have his hair messed with, tbh :p)

But really, take your time please! Don't hurt yourself trying to meet a deadline. I would be happy to wait.

Late answer lol but!! Yes! That's super appreciated! I do the same thing for indie games I like nowadays b/c reviews can make such a difference. :D

Huh! I hope I'll be able to maintain that vibe. :) Ava's a fun character! I'm really eager to have her full route available and to slowly share all the secrets Falls has to offer...

I'll do my best! :D It's something I've been mulling over for a bit so it will definitely be factored into it... (And maybe he does!)

I'll definitely try my hardest to strike a healthy work-life balance haha... Progress + self care would be key! Thank you for your patience!! 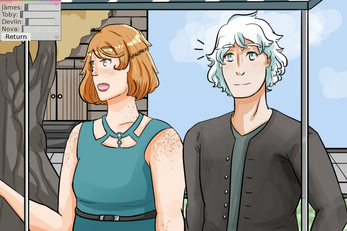 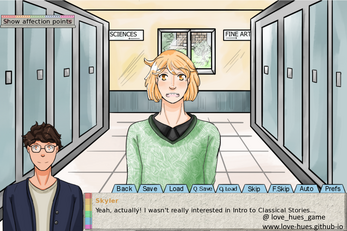 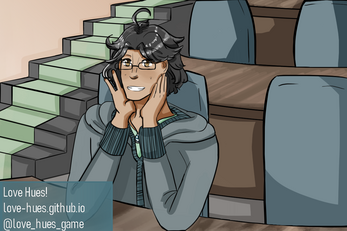 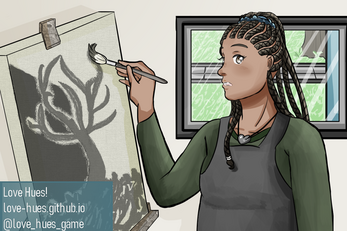